Siasa Place is an NGO formed in 2015 that aims to create an enabling environment for youth mainstreaming into our body politically.

At Siasa Place, we believe in the active participation of ordinary citizens, in an inclusive platform for young people who are willing to voice their concerns and ideas and, if need be, lead. We believe in educating people on the issues most affecting them, the roles and functions of government/s in decision-making, and the ways citizens can hold those governments accountable.

Vision: A people who are informed, liberated, engaged and dignified living in a democratic space. 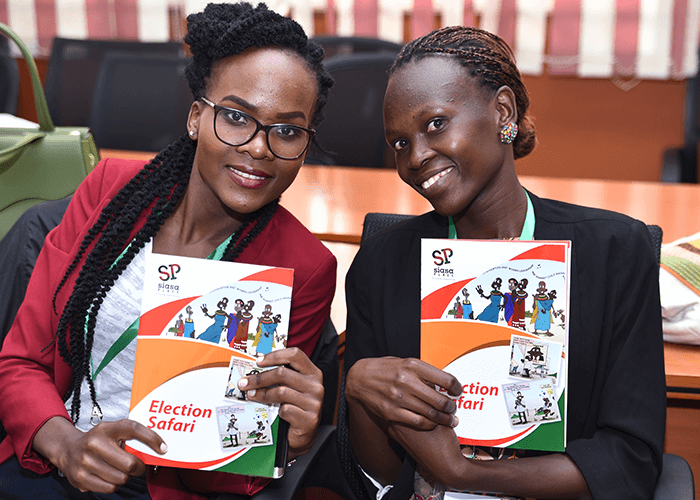 The three items below sum up the Focus of Our Programmes.

Women and Youth driven dialogues both online and offline to enhance the amount and quality of public participation.

Documenting and gathering information and developing policies that focus on the youth and young people.

Provide training and skills development to the citizen on avenues for engagement with the county government.

At Siasa Place we are committed to helping the youth to be better educated, informed and knowledgeable on issues most affecting them. We have weekly chats online on important issues on twitter which you can join under #SiasaWednesday and we do lots of meetings in the community in various counties called #SiasaTalks.

SiasaTalks are open, diverse and inclusive forums bringing youth and the public together to discuss everyday issues that affect them and to unpack how these issues are politically related. It is a forum where we educate people on constitutional provisions, such as their right to engage in governance issues and why it is important for them to not shy away from political participation – but in fact to throw themselves into it. Only through citizen participation can we start to hold our leaders to account and strengthen devolution. For devolution to work the people must be involved in the decision-making and oversight functions.

We at Siasa Place seek to be a trusted and reliable source of information. Also training of selected members of the public on three related pillars – political, social and economic issues – so that they can also train others in their counties.

Ordinary people within a nation can influence and shape the society they live in. The youth, especially, need to be engaged in shaping the policies that affect them. Policies to do with health and education, employment and agriculture for example but also many other aspects of our life in Kenya. This is because these policies (which are just big ideas around an issue put together as a coherent whole) inform government programs and that leads then to resource allocation.

Therefore, Siasa Place identifies key and important areas that need to be urgently addressed and we formulate policy briefs that can be presented to the legislature (at National or County level) for consideration and inclusion in the drafting process.

We have undertaken several social accountability programs geared towards improving youth participation at all levels of governance. In Busia County, we implemented Kenya Accountable and Inclusive Political Processes (KAIP) project between 2018 -2019, and managed to train 350 (50 youth from each of the seven sub-counties) on the role of elected leaders, their obligations in decision-making on issues affecting their lives through forums like budget making processes, County Integrated Development Plans and Annual Development Plans and public participation. The project led to the formation of ‘Busia Youth Steering Committee Network’ which was composed of 15 youth, 2 representatives (1 male & 1 female) from each of the 7 sub counties tasked to coordinate advocacy activities at sub-county level. They currently organize and coordinate youth participation within the county.

Through Imara Leadership program, we managed to capacity build 24 youth, 120 administrators and organized several social accountability meetings to help identify and influence issues that were of concern to the youth in Kericho, Kisumu and Busia. Through the project, we managed to strengthen the working relationship between youth and leaders. In Kisumu we were able to conduct ward based meetings which never used to occur.

Several county government’s are not adequately involving youth because they lacked policy to guide the process, failure to allocate resources to facilitate public participation and lack of skills on the part of government officials to conduct public participation while youth were also found to lack awareness on the importance of their participation and the avenues through which they could participate. As a result, we have established a good working relationship with Kericho County Assembly and assist in review of some bills that are of concern to the youth before they are passed in the assembly.